Continuing within Genesis, let us move along to Chapters 6-9.

This is, of course, a well known story - or at least an often retold one, with the retellings holding varying degrees of similarity to the original. It has long been known that it is by no means unique as a Flood Narrative, there are several others in the Ancient Near East alone. It is composed of two separate stories twined together, as one can tell from the contradictions and 'rough-edges' within the chapters.  The Divine Being is referred to as God in one story, and the Lord in the other, if you want to sort them out!  There are several images of God here that may seem surprising, and that we cannot run away from if we wish to appreciate the story in its fulness.

6: 1 - 4
Oh my!  The Sons of God....  This marks the passage out as having been written down very early on, since it doesn't have any hint of the 'radical monotheism' that was to appear later on in Judaism.  This very closely tallies with the myths of other religions, where the heroes are produced by divine-human mating.
While we may not want to use that particular imagery, this does give us a very early picture of God as parent.

6: 5 - 7
An angry and destructive parent, however.  The creative God of the creation story is inverted, by virtue of judgmentalism.  It is destruction without reason or restraint, as the animals share in the punishment of humanity.  Children who have not yet attained the 'age of reason' and are therefore innocent will die too.  Without restraint, no anger can be claimed to be righteous.

7:4
God the enactor of genocide on a level otherwise unknown.  Oddly enough, this is an aspect that features very little within our children's stories.  However, if our theme is salvation and survival, the flip-side is mass slaughter.

8: 20f
God the lover of a good cook-out.  Be in no doubt, that is why the smell is pleasing.  This is an understanding of a deity who wants nourishment provided by the sacrifices of the faithful.  It is also a deity who learns from over-reacting, and resolves never to repeat the mistake

9: 1 - 7
This is God who provides a structure for existence, with clear penalties for breaking that structure.  As part of it, humanity is now under divine protection because we share in God's image.

9: 12 - 16
God the protector provides a reminder that the Lord is a warrior, with a weapon standing between us and disaster.  It is to act as a reminder, whenever God may be tempted to destroy humanity again.
Oh dear, God needs reminding not to be genocidal again!


The picture of God which emerges from the Flood narrative is not a very pleasant one.  The ancient Hebrews accepted it as one side of God's nature, however.  In that, I think, we may find a lesson for today.  We might want to see God in positive ways only, but the Jews declared that it was possible to see the negative side and yet still name it as God.

These images show us a God made in our image.  Immoderate and judgmental, vindictive and hedonistic, violent and forgetful.  When we only see God in positive ways are we, perhaps, hoping that God will only see us that way too?  God was in Christ, and so came to know us fully, good and bad, wise and full of folly.  The salvation we have in Christ is free from the images we have here - largely.  As we are loved, let us love God.  Without restraint. 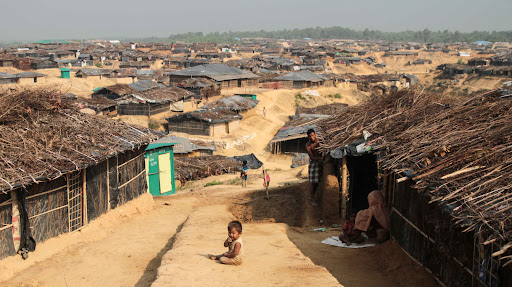